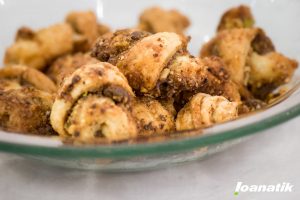 Grandma Pearl's Rugelach
2018-05-04 14:18:49
Yields 32
My grandmother, Pearl, used to make the most amazing Rugelach. They were by far my favorite thing she made. Whenever we would go to her apartment in the Bronx, she had them ready and waiting for my brother and I. As she got older, when she was able, she would freeze little bags of ruggies, so, even if she didn't feel up to making them fresh, they would still be there for us to enjoy.

Grandma Pearl used to work for the City of New York sewing uniforms. One day she had slipped on ice on the way into work and hit her head. As a result of the injury, she lost her sense of taste and smell. The loss of key senses affected her enjoyment of life and her ability to cook, but, she kept on making ruggies for us. She made them into her early 70's and stopped when the arthritis got too painful for her to knead the dough.

My mom told me that grandma called her one day saying that she was done cooking and had thrown her recipes down the incinerator. All those wonderful recipes and history were lost.  I have been trying to recreate Grandma Pearl's Rugelach recipe for almost 30 years. I tried recipe after recipe, but, they never quite matched the flavor and texture of grandma's.  Each time I entered the recipe onto a spreadsheet and studied the ratios.  I threw out countless batches as being too cakey or too sweet or just too blah. The recipe below is as close as I've come to Grandma's recipe and I'm sure that it's missing some elements of her version, but, it's close enough to bring back all the memories of her apartment in the Bronx.

How do I get PMI removed from my monthly payment?
Mortgage Refinance: Should I Wait?
Everything you ever wanted to know about Mortgage Insurance but was afraid to ask.