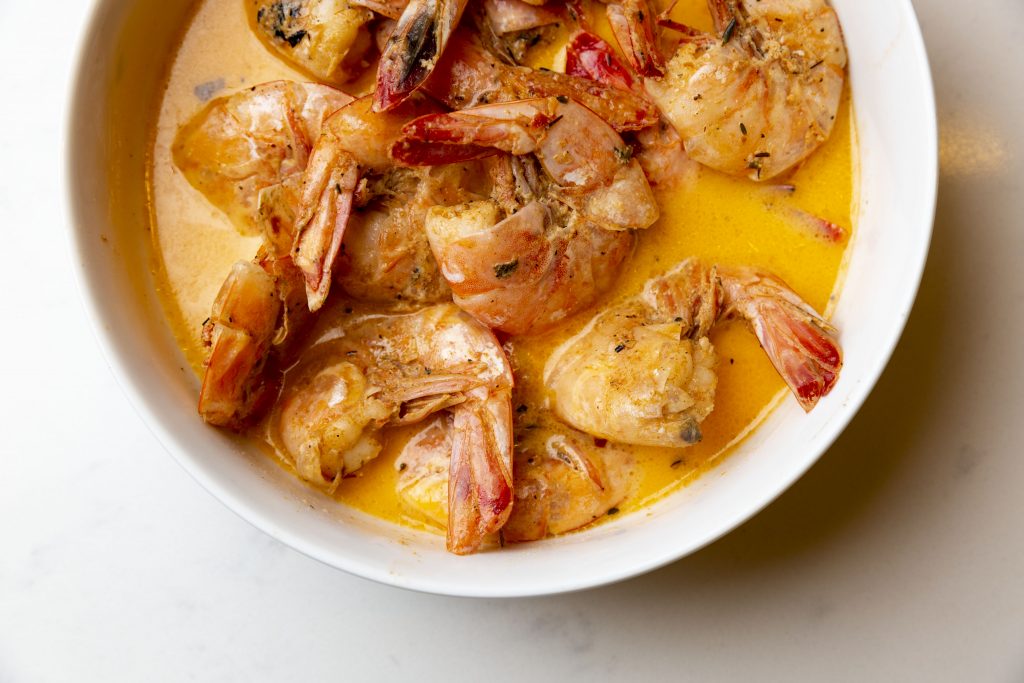 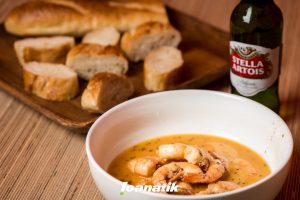 Loanatik's Killer Shrimp Copycat Recipe
2018-05-06 13:31:35
Serves 2
In the late 80’s or early 90’s I owned a company called Programmer's Warehouse which was a leading supplier of computer software that we both developed and distributed throughout the world. Being in computer industry in those early days of the industry meant that you could interact with people that would be less accessible today. One of those people was Tom Rettig. Tom had an incredible apartment in Marina Del Rey overlooking the marina. It was gorgeous. A handful of us were hanging out at his place one weekend, had the munchies and decided to check out a little place called Killer Shrimp.

OMG, it was a dive. They served only one dish: Killer Shrimp. That was it. No Meats. No Foo-Foo Drinks. No Frills. You could choose your starch: Rice, Pasta or the venerable French Bread. I always chose the french bread. They’d bring the shrimp piping hot from the kitchen. You'd peel and eat the shrimp, dipping the french bread in their rich, spicy broth. It was an amazing combination of flavors. Just perfect with a cold beer, good friends and lots of interesting conversations.

Every time I was in LA I would make it a point to visit Killer Shrimp until their closing in the mid-late 2000's. In November 2004 a recipe started circulating on the internet that claimed to be a Killer Shrimp Copycat. I tried it a couple of times but it never came out like the original: didn’t smell like Killer Shrimp, it didn't look like Killer Shrimp, and, most importantly, it didn’t taste like Killer Shrimp. From a cooking perspective it didn’t make sense to me either. For example, it had Chicken Broth and Clam Broth as a base. I couldn't understand those choices: chicken is the wrong flavor entirely and clam broth seems like a cheap, salty substitute for actually making rich shrimp stock. There were other things that struck me as odd in the recipe. If memory serves (and at my age it may not) I thought there was a slight orange tint to the broth in the original recipe. I think the copycat recognized the tint and added 3 oz of tomato paste. I don't think that the original had tomato paste as part of the flavor profile and think the coloring came from cooking the shrimp shells, heads & tails. They may have also used head on shrimp and left the orange shrimp fat in the broth from when the shrimp heads were removed. It also used fennel and celery seed which I don't recall seeing in the original dish. There was also a TON of dried herbs in the dish but they were never filtered out and I don't recall seeing that many herbs in the final product. Finally, they added a bunch of butter at the begining of the dish which just turns into an oil slick on top of the broth, something that was definitely NOT in the original. All totalled, it seemed to me the recipe didn't even approximate the original.

When I was getting ready for Loanatik to do it’s Lobster Roll vs. Killer Shrimp dinner and social media bootcamp I was amazed to see that old, questionable recipe had proliferated throughout the net. It was everywhere and people were raving about it. Really had me scratching my head, so, I figured, I should probably develop the Killer Shrimp recipe from scratch, giving the internet recipe, a vague nod. I spent quite a bit of time refining this recipe to get as close as I could to my recollection of that first taste of KS's broth. This version is extremely close to the original. It has a similar look and taste. It has a about the same amount of fire and it's really addictive -- just like the original. The cream at the end gives it just the right mouth feel.

How do I get PMI removed from my monthly payment?
Are Home Warranties a Good Deal?
3 Ways You Can Pay Less For The Home You Already Live In