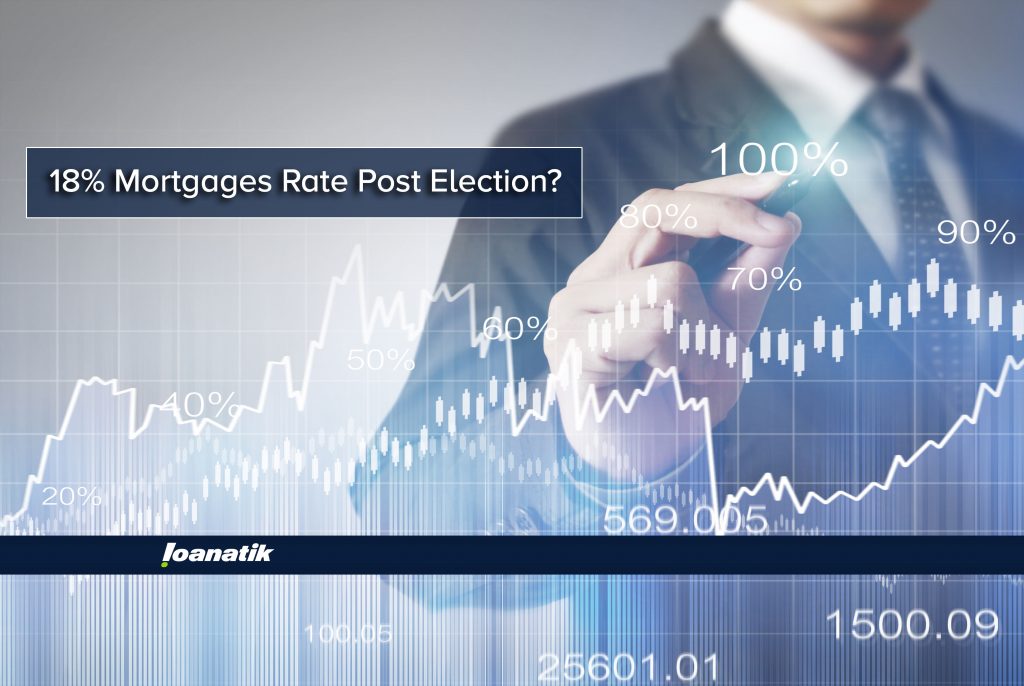 Could this happen again and what implications would it have?

Millennials should count themselves lucky for coming of age well after the harrowing economic events of the late ‘70s and early 80’s. It might be hard to conceive in today’s benign environment, but in late 1981, 30-year mortgage interest rates topped out at 18.45 percent, killing the housing market as financing became unaffordable. Are we in that kind of environment now? No. Could it happen again? Undoubtedly.

What would it be like if you bought a house in late 1981? The average house cost $82,500 back then. If you financed 80 percent of the cost, you monthly mortgage payment would be $1,019, but that’s in 1981 dollars. Using today’s dollars after accounting for inflation, that’s actually $2,500 a month, not include taxes and insurance.

To put that into perspective, today’s average home price is $322,700. If you put down 20 percent, your monthly payments would be $3,986. At that rate, you’d pay $1.43 million over 30 years to own your home. Of that amount, about $1.18 million would go to pay interest charges. In both scenarios, 82 percent of your payments would be allocated to interest.

It’s obvious why these kinds of numbers killed the housing market in 1980-82. But what drove mortgage rates so high?

The reason interest rates, which ultimately are set by the Federal Reserve, exploded in 1980 was housings’ arch nemesis, runaway inflation. The Fed funds rate, which is the rate banks charge each other for overnight loans, hit 20 percent in 1980, and 21 percent in June 1981. The cause was an inflationary spiral brought on by rising oil prices, government overspending and rising wages. All three factors pushed the general price of goods and services higher, which is the definition of inflation.

When you examine interest rates closely, you encounter three main reasons they are what they are:

All three components were at work in the early 1980s mortgage market. The predominant one was inflation, which was rising rapidly and making money worth less every day. Interest rates had to climb higher to compensate for the ravages of inflation.

In the late 70’s and early 80’s, the Federal Reserve attempted to choke off inflation by repeatedly raising the Fed funds rate until it hit 21 percent. For a while, some consumers were able to take advantage of the higher returns on savings to enable them to afford the rising interest rates. But as rates rose, fewer individual and businesses were willing to commit to paying huge amounts of interest. Eventually, demand for money dried up, and with it, business investment and economic growth. We rapidly fell into a recession, which finally killed inflation, along with growth and employment.

Now, the Federal Reserve influences short-term rates directly by manipulating the Fed funds rate. But mortgages typically are 30-year obligations. The spread, or interest rate differential, between short-term Treasury bills and 30-year Treasury bonds helps determine mortgage interest rates. During the period of 1978 through 1981, the Fed pushed up short-term rates so that they were much higher than were long-term rates. This is an inversion of the typical yield curve, which is a plot of interest rates versus maturities. The inverted yield curve meant that it took a while for mortgage rates to approach the astronomical heights of the Fed funds rate. But by late 1981, mortgage rates peaked.

The inverted yield curve is a clear indicator of an impending recession, because it means that there was little demand for long term loans – the time value of money had been turned on its ear. Why tie up your money for 10 to 30 years when you can earn high interest rates overnight. Therefore, why invest in growing your business or lending out money for mortgages? Bang! Investment ceased, and down went inflation, the economy, interest rates and the job market. If you were looking for a home in the early 80’s, you’d be experiencing eye-watering interest rates that could (and did) drive many consumers into renting rather than home buying. And if you were stuck with an adjustable-rate mortgage, you could (and did) lose your home when you could no longer afford the monthly interest charges.

The result was several years in which home ownership became more and more problematic, where people overpaid for mortgages or simply dropped out of the market.

Right now, interest rates are super low, and it’s a golden era for home buying. But if you think that we will never see high mortgage rates again, consider these potentialities:

We’re not saying that the Rapture is about to descend upon us. We are saying that right now, interest rates are extremely attractive, and we don’t know how long this will last. Contact Loanatik today and lock in a low interest rate, even if your credit rating isn’t so good. Don’t take low mortgage rates for granted, because they aren’t.